There was a characteristic elevation in the position of women on the territory of Poland after the first World War – not only when it came to acquiring voting rights but also regarding the carrying out of female aspirations related to obtaining professional certifications and necessary qualifications. That period of time is even sometimes shortly referred to as a ‘female knowledge rush’ where women were taking care of the development of their academic careers.

I want to illustrate this issue using the example provided by the medical faculty of the Vilnius University, one of the several faculties that operated at that university from 1919 to 1939. It is worth emphasizing that the aforementioned faculty foresaw – even as late as the end of the 19th century – a number of restrictions related to women. A woman attending the Medical Faculty was, at the very least, seen as behaving somewhat inappropriate. 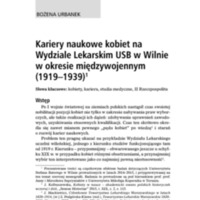